Visitors from abroad once descripted Marin as being 7 steps from heaven.

The photos contained in my book, I hope you'll agree, are supportive of that revelation. 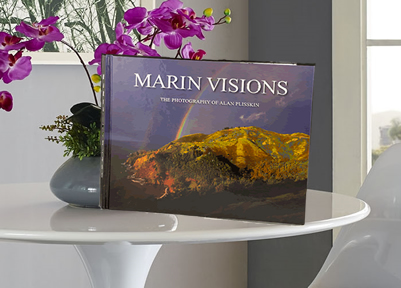 The Marin Visions book is the culmination of over 30 years of photographing the beauty of Main county by San Rafael nature photographer, Alan Plisskin. In 1996, Alan decided to start producing the wall calendar, Marin Visions, to share the imagery that he was capturing in this special place that he has called home since 1988. Over 90% of the images in this book have apperead over the years in the Marin Visions calendar. With over 200 pages of images, the Marin Visions book captures the beauty of Marin County season by season, from the top of Mt Tamalpais to the beaches of Pt Reyes, from northen Marin to the Golden Gate, including many aerial views to see Marin from different perspective.

Alan's goal is to share the amazing beauty of our county and offer a respite from the hustle and bustle of everyday life, especially in the somewhat stressful time that we are living through in the 21st century.